This year’s Halloween Party, sponsored by my sister Debbie, niece Ashley and her husband Jon, was so big and so spectacular, that I’m writing two blog posts about it. Part I focuses on the theme and decor, and Part II will focus on the attendees.

The theme for 2016 was Tim Burton movies. Guests were asked to attend in costume, as a character from one of Burton’s many films. The house was transformed, amazingly, by the creative genius and talent of Debbie, Ashley and Jon. The dining room and hallway became part of Wonderland, a bedroom was the Gotham room and the breakfast nook assumed the form of Mrs. Lovett’s Meat Pies Restaurant. Ordinary rooms disappeared and magical scenes and props carried the Tim Burton movie theme throughout the house.

Here is a pictorial tour of the marvelous decor of the Tim Burton Halloween Party.

Through the rabbit hole – Wonderland 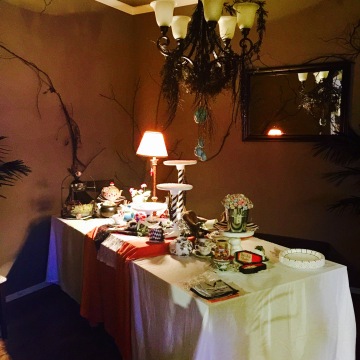 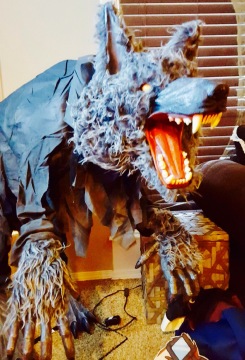 These pics reveal the scope of planning and decorating that goes into this yearly event. As always, I was beyond impressed with the creativity of Debbie, Ashley and Jon. There were other vignettes. Every table top, shelf and corner held tributes to the wild imagination of Tim Burton. Although this hard working trio purchased a few props, the majority of the decorations and room transformations were handmade, using a variety of clever materials and techniques.

Come back for tomorrow’s blog post, and have a look at the characters who showed up tonight!

I am a woman on a journey, sharing about life as it unfolds. This year is the Year of the Wild Woman. I'm excited to see what I learn and where I go during 2021.

This is my Year of the Wild Woman. Check in often to discover what I’m learning as I live as my most authentic self and shake loose anything that is not soul.

Honored to be in the Top 60 Missouri Blogs to Read

This 30 Day Course has it all, from setting up a blog to monetizing it. I highly recommend the Blogging Blastoff 2.0.

Love to travel and write about your experiences? Want to see more of the world? Enroll in this excellent travel blogging class. I highly recommend.